Competent, diligent, ethical, and professional. These are some of the words clients have used to describe Matt Pavone. With over three decades of experience as a litigator in both the government and private sectors, Matt offers seasoned expertise in the areas of White-Collar Criminal Defense, Civil Litigation, Federal Litigation, Police Misconduct Investigations, Healthcare False Claims, and Mediation/Arbitration. His cases have ranged from long-term, complex, multi-party litigation, to individual disputes. His special perspective as both a defense attorney and former prosecutor, coupled with caring, personalized service, are hallmarks of his practice.  His years of outstanding service on behalf of his clients in courtrooms and boardrooms has earned him the admiration and respect of judges and opposing counsel throughout California

Matt graduated Phi Beta Kappa from the University of California at Berkeley, where he earned his undergraduate degree, before receiving his Juris Doctorate from the prestigious Hastings College of the Law in 1980. His distinguished legal career includes a federal judicial clerkship and an appointment to serve as the Chief Assistant United States Attorney in San Francisco. While with the U.S. Attorney’s Office (Northern District of California), Matt was selected to head the Organized Crime Drug Enforcement Task Force (OCDETF), where he coordinated major federal drug and money-laundering prosecutions throughout the Pacific Northwest. He received an Exceptional Service Award for his work in this capacity. The following video highlights his featured interview with journalist Mike Wallace on CBS 60 Minutes in 1989.

As an advocate, Matt confidently guides his clients through the legal process by assessing their unique circumstances, answering their questions, and keeping them informed at each step. His skills as a trained mediator provide the foundation for successful conflict resolution and negotiation.

Matt is a member of the San Francisco, Marin County, and California Bar Associations, as well as a founding member of the Northern California Chapter of the White Collar Crime Association. He is admitted to practice before all of the federal and state courts in California, including the Ninth Circuit Court of Appeals.  He possesses Martindale & Hubbell’s highest possible “AV Preeminent” rating in both legal ability and ethical standards-reflecting the confidential opinions of members of the Bar and the Judiciary, and he has been awarded the title of “SuperLawyer” as one of the top 5% of attorneys in Northern California.  Matt has also been selected by the National Association of Distinguished Counsel as one of the Nation’s Top One Percent of attorneys. The NADC is an organization dedicated to promoting the highest standards of legal excellence. Its mission is to objectively recognize the attorneys who elevate the standards of the Bar and provide a benchmark for other lawyers to emulate. 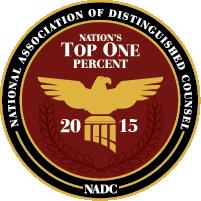